Restoring and updating an Amiga 1200 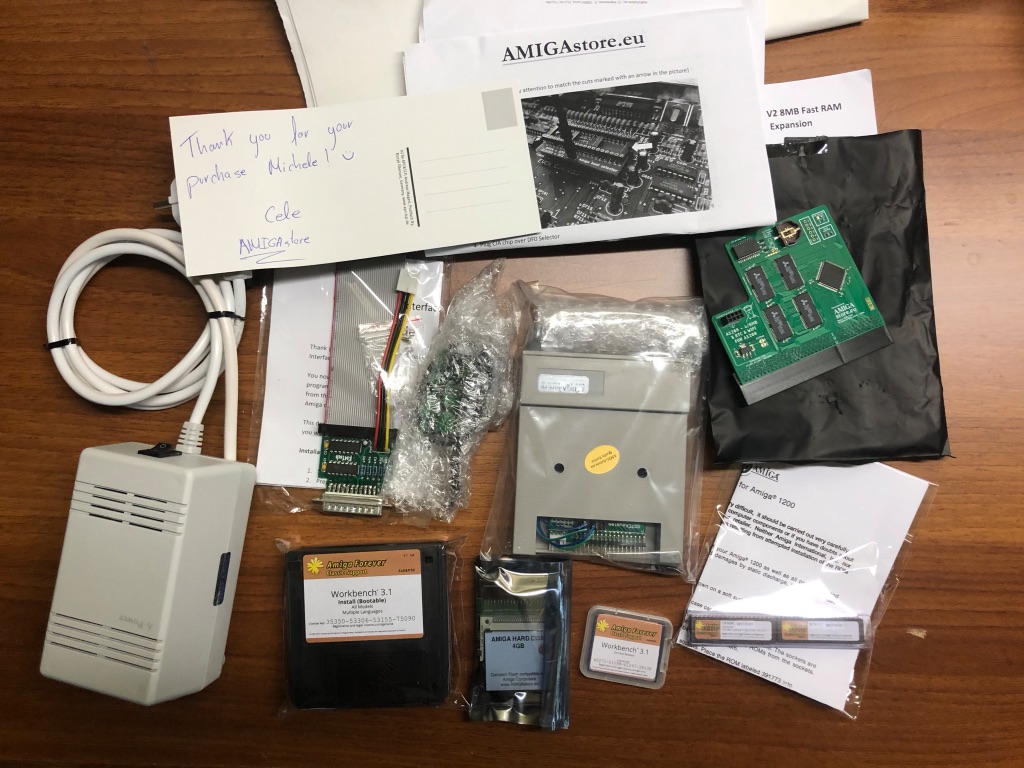 I had been an Amiga user for a long time between the end of the 80s and the beginning on the 90s: these computers were ahead of their time, and I loved them. I owned an Amiga 500 (then sold) and an Amiga 2000 (which I’m trying to repair), both featuring kickstart 1.2.

I recently saw an Amiga 1200 on sale in a town not far from me, so I decided to take it to see what I could do with it. I then began jumping around online forums, and discovered a whole universe of Amiga enthusiasts. Shortly after, I decided to try to work on this glorious computer, and this is what I’ve done (so far).

I purchased most of the add-ons and hardware described here on AmigaStore.

One of the problems with old computers are capacitors: after so many years, they may not work as expected and (in the worst case scenario) also leak their fluids on the mainboard, causing various damage. So, I just switched the Amiga on a couple of times before sending it to a very competent folk here in Italy, which did the recapping and also checked that everything was in good working order. 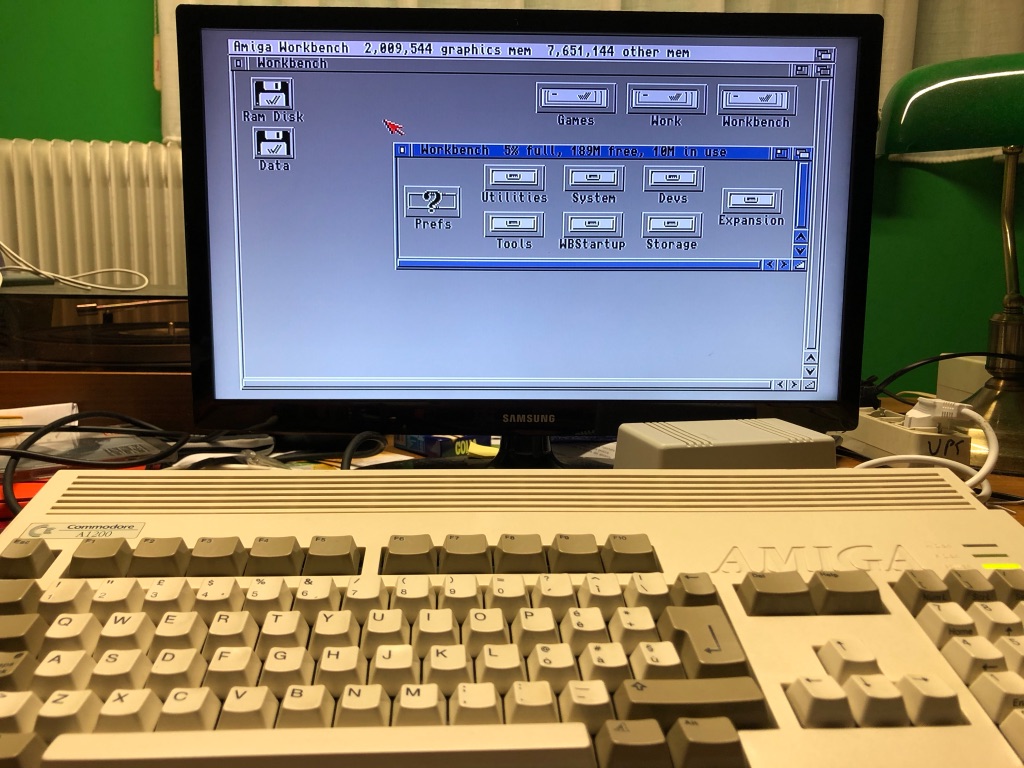 I indeed plan to get a Commodore or Philips CRT monitor, like the ones we used back in the days. In the meantime, however, the best choice was a LCD television, which has the required SCART connector.

Moreover, while it lacks the nostalgia factor, the LCD provides much better picture quality, and also the interlaced modes - which looked horrible on the CRT monitors - are very usable. 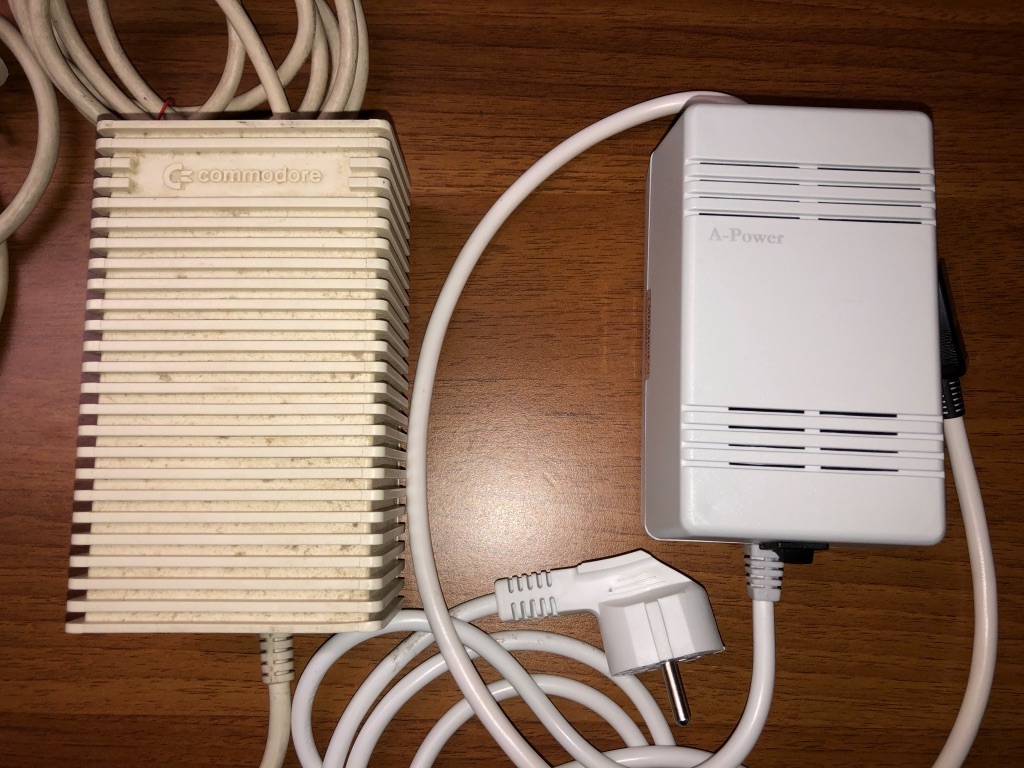 The original external Power Supply Unit by Commodore was glued and impossible to open, so recapping was a no-go. It was also just 25 W, which wasn’t ideal with expansions, disk, etc.

Many current Amiga users stick with ATX PSUs, which are inexpensive and supply plenty of power. I wanted something more classic - at least in the looks - so I bought a white Amiga-specific PSU: it’s smaller and way lighter than the original one, and it supplies a decent (and enough for most classic uses) 50 W of power. 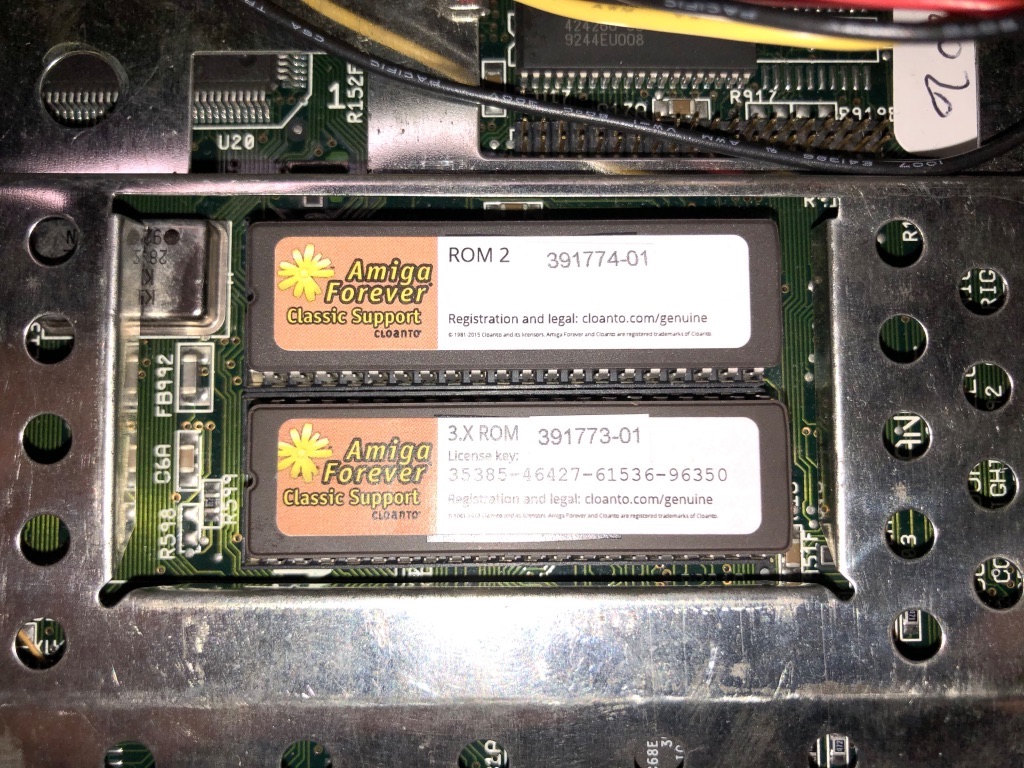 Amiga 1200 usually came with kickstart 3.0, which is fine but could use some bugfixes and improvements. There are two main improvement choices:

I was initially tempted by kickstart 3.1.4, but then I decided to stay as traditional as possible. So, the Cloanto 3.x series looked like the best choice, being faithful to the original ones while featuring some needed patches such as the ability to use large disk partitions. 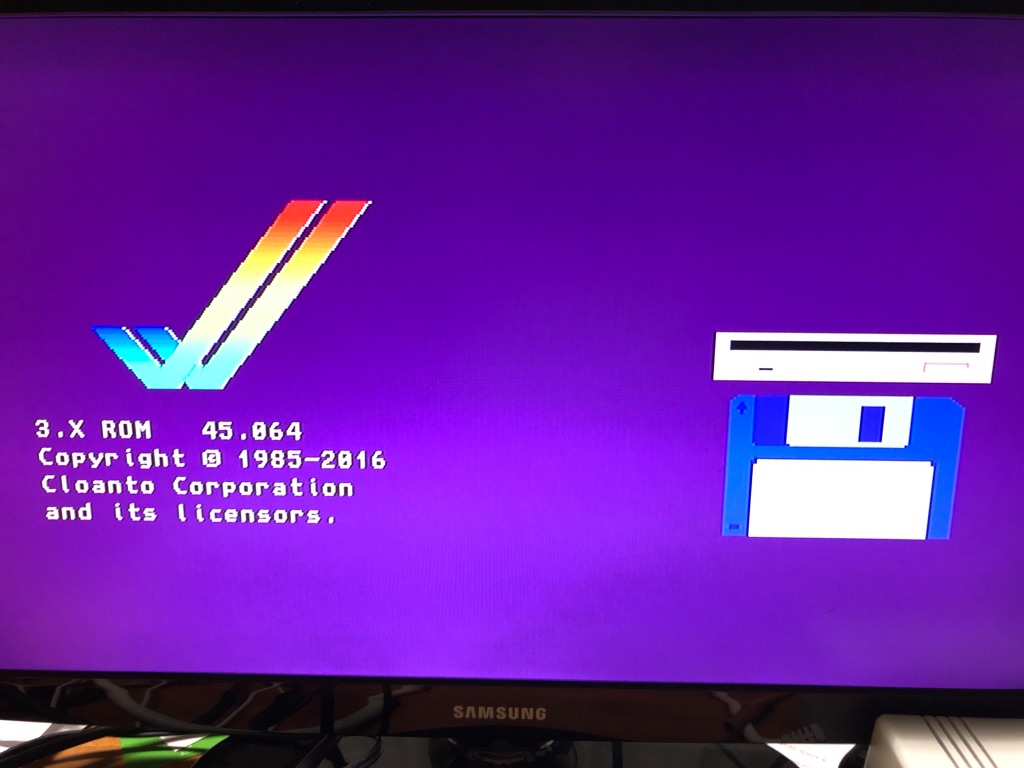 Installation was almost straightforward: with the help of a screwdriver I removed the old 3.0 ROMs and inserted the new ones (after adjusting the alignment of the pins, which were a bit too wide).

Everything looks fine, except for the copyrights on the welcome screen which are (of course) not by Commodore_ anymore like in version 3.0, but by Cloanto: I’ll live with that. 😊 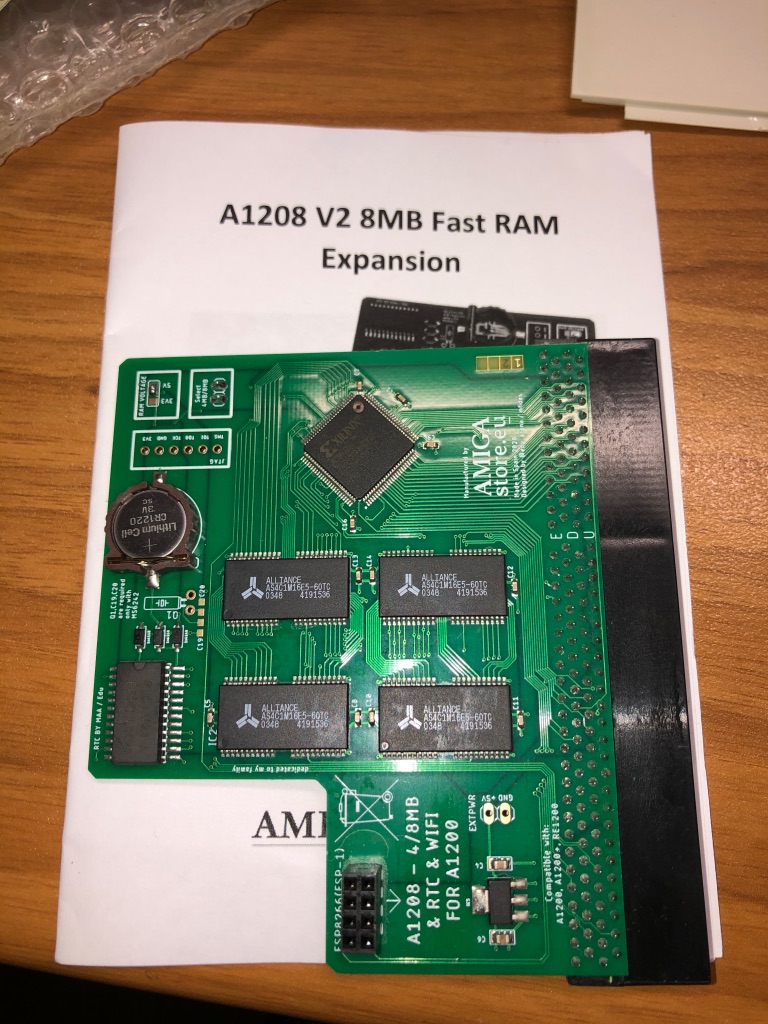 However, I feel Workbench 3.1, WHDLoad and other applications would benefit from having some more RAM, so I installed an A1208 expansion card, which adds 8 Mb of fast RAM: it should be more than enough for my needs, even for AmiBlitz, which I plan to play with.

The system reacted very well to the installation of this expansion card (which was easy enough, even though I didn’t remember how hard you have to push expansions in the slots in those old computers 😆). Before installation, upon booting Workbench, I only had about 1.3 Mb of free chip RAM. Now I almost have the full 2 Mb free, plus about 7.5 Mb of fast RAM.

The expansion card also includes a Real Time Clock (RTC), with battery. This was optional, but I really want a computer that can remember date and time.

The computer had a 480 Mb IDE hard drive installed: even though fast, it was noisy and sometimes it turned off spontaneously: I though the problem was in the PSU, but even with the new power supply it didn’t work properly, and in the end it died altogether.

I opted to replace it with a IDE-to-CF adapter, to which I added a pre-installed Cloanto’s Workbench 3.1 CompactFlash card. As it happened with the kickstart, I was tempted to go with Hyperion’s Workbench 1.3.4 and all its nice coloured icons, but then I really wanted to stick to the Commodore era as much as possible.

The adapater is really nice: very easy to install, it doesn’t move around - I just put a thin plastic layer under it, to avoid the risk of contacts touching the metal. It doesn’t even need the power cable: it takes the (little) power it needs from the IDE cable. No more hard drive noise, it’s a true bootable disk, Workbench loads blazingly fast (less than 5 seconds!) and works like charm.

Now it’s time to transfer some applications and games into the Amiga. I will write about that in the next post!